The Teamwork Orientation Inventory (TWO) is designed to enable team members to quickly and reliably identify important strengths and weaknesses in the way their team operates – their team work orientation. This allows team member to focus on interventions which either consolidate strengths and/or attend to weaknesses.

Doug Strycharczyk and Professor Peter Clough (Manchester Metropolitan University) have, over nearly 25 years developed a model which describes the key components of high performance team working. The more competent that a team is in each area, the better its team performance and behaviour

TWO is an inventory based on 5 elements recognised as key attributes in high performing teams. Each of these attributes has 2 sub-scales. Core elements are: 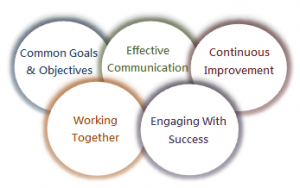 TWO is normed against a global norm created from analysis of teams completing the measure over the past 5 years. Consequently TWO allows allow bench marking of team performance and team behaviour.

Reports come in the form of a workbook which guides the team members in problem solving activity.

AQR has a programme of interventions focused on Building Effective teams. This programme has been developed and refined over 30 years. It was featured on BBC TV in the UK in the 1990s where its application with Champion Spark Plug  was described as “unique” and ” highly effective” by no less than Professor John Adair.