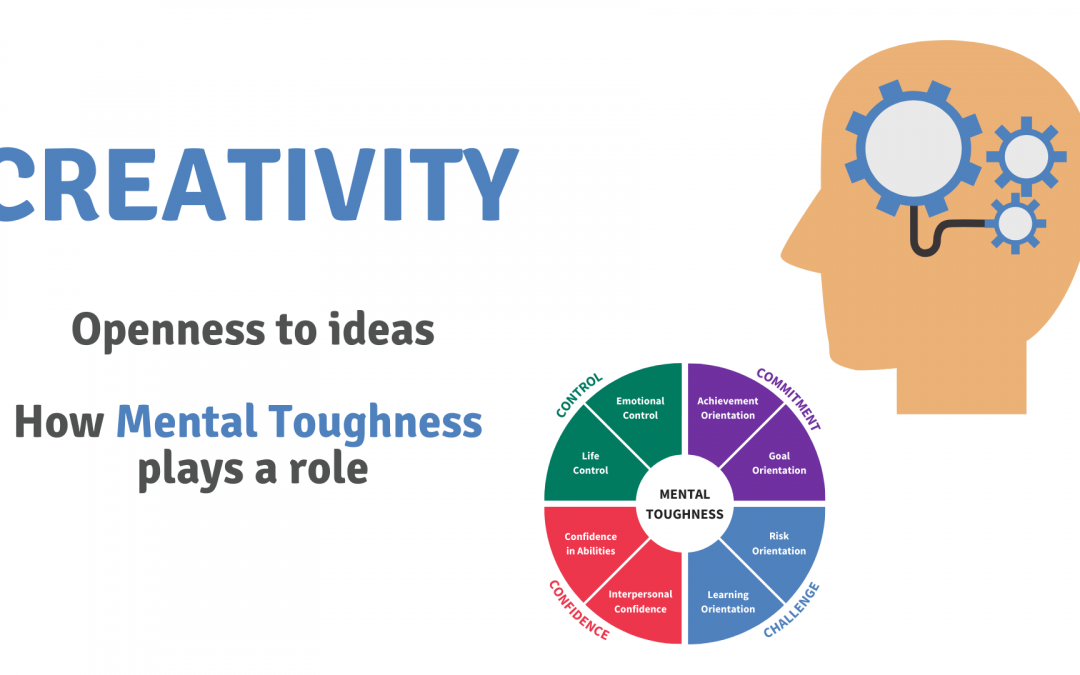 Creativity and Innovation are two terms that are often used interchangeably. They are related but they are different. In this article, we will look at the first – Creativity – and its relationship with mental toughness – the way we think about situations and events.

A good definition of creativity is “the capability or act of conceiving something original or unusual”.

It is useful because it is consistent with most clear definitions of creativity. It also indicates another potential quality. It doesn’t mean that the creative output will always work or is immediately practical.

Innovation requires creativity but they are not necessarily the same things.

To complete the picture, we might define Innovation as “the implementation or creation of something new that has realized value to others”. In other words, there is an outcome that is usually an improvement on what existed before.

It is widely accepted that Creativity is a high order thinking skill. It generally requires knowledge and understanding of the topic to which creative thinking is being applied. It is also necessary to be able to challenge this knowledge, to question what we think we know and to be able to think beyond what we know. Colloquially, “to think outside the box”.

If Creativity is such a thinking skill, then it is likely that our mental approach to situations and changes, the way we think, might influence creativity.

It’s not a surprise that “a Growth Mindset” is often suggested as a condition for creativity.

For the remainder of this article, we will look at creativity in general. We’ll do so through the lens of the mental toughness concept. In particular, by examining the 8 factors in the 4Cs model to look at the possible relationship with Creativity.

The Mental Toughness framework is often usefully shown as a “pizza” image which show the 8 factors and how they relate to the 4Cs, to resilience and to positivity as well as to mental toughness in general.

This granularity is important. We know that the 8 factors are reasonably independent and means they can often combine to produce a unique (to the individual) approach to thinking.

So, would such a mental approach be relevant to creativity? You would expect so.

If we start with the Challenge construct, the Risk Orientation factor describes an openness to new ideas, new experiences, new situations, etc. Widening the range of what we know and understand should be a benefit for creativity. As would be preparedness to accept a change to what we already know and understand. It indicates a kind of curiosity.

The Learning Orientation factor describes a potential, perhaps a proficiency, for reflection. To examine what we come across in our explorations and think about its implications. Again, this is an approach that would support creativity.

A degree of mental toughness for both might then be an asset in creative work. 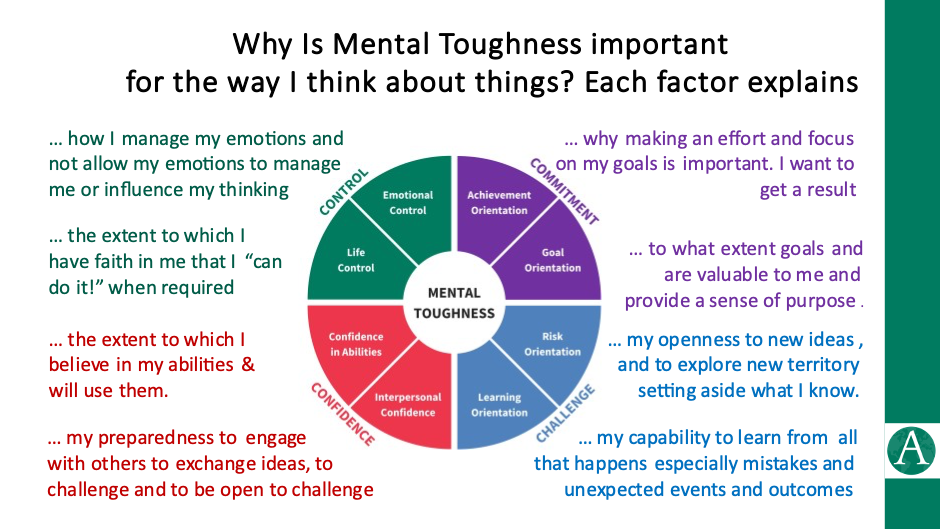 Turning to Confidence, Confidence in Abilities might impact creativity in two ways. Firstly, creativity is likely to require the application of some existing abilities – knowledge, skills, aptitudes – to deal with what discovers. Self-belief in our abilities should mean that we are more likely to use them

Secondly, this factor might also impact the individual’s belief that they have actually discovered something new or different. Creativity will often produce an outcome that is radically different and its value may not be immediately apparent. If we lack self-belief, we may then doubt that we have created something new and may doubt our ability to do more with it. The creative process could be stunted and the outcome never revealed.

Again, those who are mentally tough in this regard might have an advantage.

With Interpersonal Confidence, we may have a different, less clear,  picture.

It is sometimes argued that there are two approaches to creativity. In the Belbin team roles model, one of the roles, the Plant, brings creativity to a group. Those who tend to fill this role well are often described as the quiet loner who works largely by themselves and appears to create “out of thin air” without much connection with others. They can appear spontaneous and instinctive.

This individual may not need to engage or connect with others and when other inputs are needed, may even prefer to source from books, papers etc rather than from people.

On the other hand, the Belbin model also describes the Resource Investigator role. This too has creativity at its heart. This time, those, who fulfil this role, are often described as networkers. They thrive by connecting with others, exchanging and exploring ideas with those in a way that generates new ideas and approaches.

In this case, Interpersonal Confidence might be significant. The person who readily engages with others, especially strangers, and who doesn’t hold back from asking the most basic of questions, will likely have an advantage in creativity.

Life control – having a sense of self-worth – might impact creativity in a similar way to confidence in abilities. If I have a sense that “I can do this because I think I can” and “ I will certainly try this”, this is more likely to support creativity than the opposite of this way of thinking.

“The worst enemy to creativity is self-doubt.” — Sylvia Plath

Managing one’s emotional responses might influence one’s approach to creativity. That is, whether it is structured and logical or it is spontaneous and intuitive.

Finally, if we look at the Commitment element, being goal-orientated may not be so significant if the creative urge is not focused on a particular outcome. Innovation, of course, is often directed towards a goal.

One level of achievement orientation might not determine whether one is creative or not but is more likely to influence the degree of effort one puts into the creative process.

There is a big caveat here.

As always, self-awareness is key. Understanding your levels of mental toughness, and how that might impact creativity, can lead to approaches being adopted to attend to any potential disadvantage. It is perfectly possible to be mentally sensitive and creative.

Finally, research around creativity carried out by Professor Clough and colleagues provides some useful additional insights.

When they explored Thinking Style they found, in general, that the more Mentally Tough appear to be more analytic, whereas the more mentally sensitive were more intuitive.

Nevertheless, it was possible to be mentally tough and intuitive or mentally sensitive and structured.

There is often a degree of pressure in a team setting to support an idea and the tendency can be to converge when working with others e.g. in teams. The mentally tough appear to be better able to resist this and maintain divergence of thought.

“Creativity is contagious, pass it on” – Albert Einstein