Why A Cold Shower Sets You Up To Seize The Day 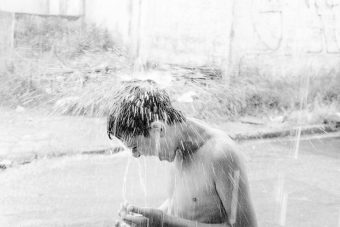 With Sydney’s current heat wave producing night time temperatures in the mid 20’s C, (77 F) a cold shower first thing in the morning has been a welcome way to cool down. Inadvertently I have found it’s also a great way to warm up to seize the day.  I have felt sharper and more focused plus I wanted to find out why and whether I should be making it a habit come the colder weather. I remembered reading about the Bondi Icebergs who swim through the winter as well the footballers and basketball players who sit in freezing cryotherapy chambers to aid their recovery and so began my search on finding out how a cold shower benefits us.

Cue the good people at Medical Daily for the research on how a cold shower benefits us:

The shock of the cold water on your body gets us breathing deeply and this deep breathing in response to our body’s shock helps us keep warm, as it’s increases our overall oxygen intake. Thus, our heart rate will also increase, releasing a rush of blood through our entire body, which gives us a natural dose of energy which enables us to seize the day.

When it comes to hair and skin, one of the most natural ways to maintain your appearance is with cold showers. Hot water has the tendency to dry out our skin, so it’s best to use cold water to tighten your cuticles and pores, which will prevent them from getting clogged. Cold water can “seal” the pores in the skin and scalp too, preventing dirt from getting in.

Cold water can improve circulation by encouraging blood to surround our organs, which can then help combat some problems of the skin and heart.  Ned Brophy-Williams a Physiologist at NSW Institute of Sport explains “Cold water immersion works by redirecting blood flow from the peripheral to deep blood vessels, thereby limiting inflammation and swelling and improving venous return -the amount of blood returning to the heart.  Essentially, improved venous return means that “metabolites and waste products built up during exercise can be efficiently removed by the body and nutrients quickly replenished to fatigued muscles.”  What Ned means is that it cleans you out.

Cold showers can aid weight loss in an unexpected way. The human body contains two types of fat tissue, white fat and brown fat. White fat is accumulated when we consume more calories than our body needs to function, and we don’t burn these calories for energy. This body fat piles up at our waist, lower back, neck, and thighs, and is the one we all struggle to eliminate. Brown fat is the good fat, which generates heat to keep our bodies warm, and is activated when exposed to extreme cold, according to the Joslin Diabetes Center, a Harvard Medical School affiliate. Thus, cold showers can promote brown fat activity.

A 2009 study found that exposure to extreme cold temperatures activated brown fat in 23 and 24 participants by a 15-fold increase, meaning someone could lose up to nine pounds in a year if they kept this practice up.

SPEEDS UP MUSCLE SORENESS AND RECOVERY

We have all seen athletes taking ice baths after training to reduce muscle soreness, but a quick cold shower after breaking a sweat at the gym can be just as effective, especially in relieving delayed-onset muscle soreness. A 2009 study analyzing 17 trials involved over 360 people who either rested or immersed themselves in cold water after resistance training, cycling, or running. It found that 24-minute cold water baths were effective in relieving sore muscles one to four days after exercises with a water temperature of 50 to 59 degrees Fahrenheit, or 10 to 15 degrees Celsius. However, some studies involved colder temperatures.

Jumping into the shower without letting it heat up, or going into the ocean without slowly acclimating to it, can help promote hardening, increasing tolerance to stress, and even disease. A 1994 study found a drastic decrease in uric acid levels during and following exposure to a cold stimulus. There was also an increase in gluthathione, an antioxidant that keeps all other antioxidants performing at their optimal levels. The participants, who were 10 healthy people who swam regularly in ice-cold water during the winter, adapted to repeated oxidative stress.

Cold showers can also alleviate and even prevent depression.  A study by Researcher Nikolai Shevchuk at Virginia Commonwealth University School of Medicine ,found the secret to achieving a psychological lift includes taking a cold shower at 3 degrees  for 2 to 3 minutes once or twice daily. Shevchuk theorizes that short, cold showers may stimulate the locus ceruleus, or “blue spot,” which is the brain’s primary source of noradrenaline – a biochemical that could help mediate depression. As in homeopathy, the body is stressed by a hostile factor–in this case, icy water-that stimulates a healing response.