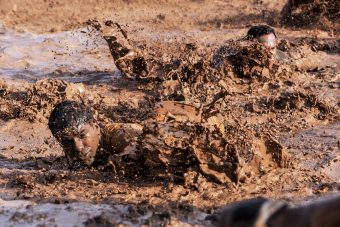 Having a tough mindset means that you have the mental resolve and single mindedness to achieve your goals, without being beaten or distracted.  Also you are sufficiently adaptable, decisive and confident to spot and seize opportunities as they arise.  However, being too comfortable can dilute that resolve and reduce your ability to develop a tough mindset.  My own recently discovered daily discomfort is a cold shower in the morning, which I described in another post.  By purposefully making yourself uncomfortable you push yourself beyond your limits and thereby accomplish more.

He cites the examples of standing barefoot in the snow, soaking in a tub of icy water or taking a plunge in a cold lake.

Carney discovered the life-changing power of extreme environments in 2013 when he set out to debunk eccentric Dutch fitness guru Wim Hof’s claim that he could control his body temperature and immune system at will. Carney had just written about another so-called guru who had lost touch with reality in the pursuit of enlightenment, and he was pretty sure Hof was another charlatan.

“I thought perhaps he had genetic adaptations and others would die if they tried to emulate him,” says Carney. “I was going to prove him wrong, and as it turned out that wasn’t the case. Within a week I was able to replicate the feat he could do.”

“The problem is that technology has outpaced our body’s ability to adapt.”

The experience prompted Carney to climb to the summit of Mount Kilimanjaro wearing nothing but shorts and hiking boots, and sit on the snowy banks of a river until the ice melted around him. He chronicles his limit-pushing adventures in his book “What Doesn’t Kill Us: How Freezing Water , Extreme Altitude and Environmental Conditioning Will Renew Our Lost Evolutionary Strength and suggests that extreme activities can improve your life, too.

“I’m not an adventure seeker; I’m not even an athlete,” he says. “I happened to be pulled along and discovered these are innate human abilities.”

The environment is an important but forgotten stimulus, says Carney. “We used to think health relied on diet and exercise,” he says. “It is those things, but it’s also the space you inhabit. The problem is that technology has outpaced our body’s ability to adapt.”

“Our species has had 200,000 years of constant environmental changes and the evolutionary system had adapted to deal with it, while climate control has been around for just about 150 years” says Carney. “The drive for comfort was once something we could never achieve,” he says. “But now comfort is available at flip of a switch, and that’s a terrible thing for our bodies.”

Our body’s ability for handling the environment sits untapped, waiting to act. “The immune system is like a predator in the body, going around trying to kill bacteria, but its job has been compromised and it’s got nothing to do,” says Carney. In some cases it turns against the body with autoimmune diseases. Using environmental stimuli gives the command structure something to do. It’s like giving that predator a chew toy.”

Regular exposure to cold triggers a number of processes to warm up the body, and those adjustments will help regulate blood sugar, exercise the circulatory system, and heighten mental awareness, says Carney. Studies have shown cold exposure treatment can help with conditions such as Crohn’s and Parkinson’s disease and obesity.

Carney admits climbing mountains and sitting on an icy snow bank are extreme tests, but he believes both are important examples of the body’s capabilities. “Don’t be afraid of a little bit of pain,” he says. “I’m not suggesting that people get hurt, there’s a difference between damage and pain. Do whatever you can to give your body variation every day. It’s so easy to do; it’s just turning a knob.”

Back to me and through my cold showers I’m now an advocate of daily discomfort to develop a tough mindset. What’s Your Daily Discomfort?