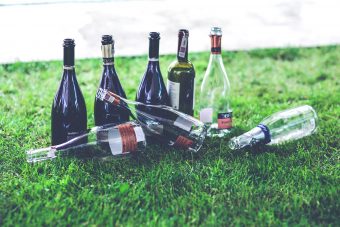 I met up with an old work colleague this morning after three years absence. As we swapped stories we realised that we had both stopped drinking alcohol several years ago and it has changed our lives.

I was a moderately heavy drinker, generally spirits and wine when out on social occasions and then a bottle of wine every night at home as a good way to unwind after a difficult day at work or to celebrate after a good win. As I got older it started to take its toll on me in the mornings. I didn’t sleep well; I woke up feeling tired and lethargic and struggled to get out of bed. I didn’t feel mentally or physically prepared for the day and it usually took me several hours and several coffees to click into gear and shed my cloudy thinking.

The evening’s alcohol and morning hangover stopped me being as positive and productive as I could be.

One December passed in a blur and I decided to quit drinking for a calendar year, just to see if I could. I won’t lie, it was hard to snap out of the habit of reaching for the bottle and I had to find different ways to manage my stress and the social aspect of meeting someone ‘for a drink’.

It took willpower as friends and work contacts would encourage me to drink and when I got home I was tempted to reach for my security blanket in the form of a bottle. However I got through January and as the end of February approached it all became a lot easier. At work and socially, people knew I was serious about my abstinence and respected my discipline. At home I worked on a celebration or commiseration routine different to that of slumping in a chair with a bottle of wine. There was no one routine, different routines for different situations, which made me feel more versatile, more positive and reinforced my confidence that I was doing the right thing.

By March and April some really good things were happening. Changing my alcohol habit helped me change other habits too. I was sleeping better and waking up earlier. I developed the routine of preparing for the day, responding to emails and writing, whilst watching the sunrise and listening to the birds as the rest of the world woke up.

I started to eat better and I lost weight because I wasn’t consuming the alcohol calories or eating as much alcohol inspired junk food. The best part was I started to feel more positive, more focused and more productive during the day. As the end of the calendar year approached I couldn’t imagine going back to my former addiction. I sailed through December lucidly and got to New Year’s Eve and didn’t drink. Or the next day, or the next week.

Several weeks later we were on a family holiday in Bali where the caprioskas were cheap and delicious. I finally succumbed and paid the price in the morning. That was enough for me to draw the line and so I stopped and never went back. I’m not a wowser. I’m regularly around people who drink and that’s fine.

Not drinking, or more accurately not binge-ing, has certainly helped with my mental toughness too, because I feel more positive, more disciplined, more focused and able to make things happen more easily and more quickly. I just see more things in life more clearly now. I highly recommend it.