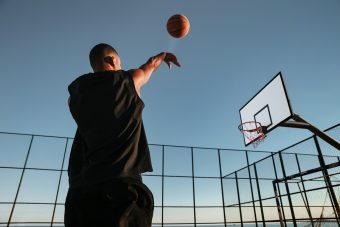 Basketball is a sport that requires its players to be mentally tough and this discipline was amply illustrated on our son’s school’s recent basketball tour to the USA.  During this 3 week tour, 28 boys and 7 coaches played competitive matches at Varsity, Junior Varsity and Freshman level. It was a superbly organised tour and the boys learnt many things, on and off the court, about being resilient and mentally tough.

At Mental Toughness Partners, we subscribe to Clough and Strycharczyk’s 4Cs framework of mental toughness, comprising the practical framework of:

This connection between mental toughness and basketball was unknowingly lived and learned every day by the boys, on and off the court.

On the court the boys required ample self-belief and positivity to play their own game.  They needed to be focused but also adaptable and able to manage their own emotions in the face of provocative opposition, home crowds and sometimes umpiring decisions they didn’t like. That discipline of not reacting but instead responding by focusing on the next play served them well.

Although the host schools were incredibly friendly and welcoming, they were also legitimately passionate about their own teams and created a loud and intimidating atmosphere, especially when our boys were taking free throws.

Most days there would be training and/or matches, which were played at different times of the day and night and obviously at new venues to which the boys needed to become quickly accustomed. Even in the poorer district state schools, the stadia were bigger than the school gyms our boys are used to playing in at home.

Our son’s school enjoys an impressive reputation in the US due to the many years of hard work of the basketball programme.  All of their matches were played in front of hundreds of people and many college scouts as well as the obligatory armed police presence. Before tip off at each match, the boys proudly sang ‘Advanced Australia Fair’ before the Stars and Stripes was passionately played and respected.

Across all age groups their American opponents generally played a different and more aggressive style with a focus on winning a position for the shooting guard (usually) to shoot for 3 points, which contrasted with our more versatile Australian style of finding room ‘inside’.

Some of the rules and umpire interpretations were also different, for example there was no shot clock and many of our boys fell foul of a different ‘travel’ interpretation.

Watching the younger less experienced freshman team, one-match sticks in my mind. Our boys had led by 12 points half way through the final quarter, but with a minute to go had been pegged back to being all square on the scoreboard.  With the momentum indisputably against them they won 2 free throws from a home team foul and to the backdrop of a loud and vociferous crowd, our player calmly and routinely potted both baskets. Although there was still plenty of time for the home team to respond and win, they and their crowd inexplicably melted at this moment, whilst our boys regained their confidence and controlled the final minute to win. It was a lesson in mental toughness right there, by staying ‘in the moment’, not thinking about anything other than the task in hand and completing their well practiced shooting routine they turned the match back in their favour. The team responded confidently by staying focused and disciplined to successfully defend the final minute.

However, it was off the court that the boys learned most about how being mentally tough can improve their performance on the court. This is also such a valuable insight to the importance of the off court mental toughness routines to the Championship winning NBA teams and their marathon cross country 82 match season schedule.

Being mentally tough is a state of mind. It is about being tighter and more disciplined about the way you approach your life and work.

Whilst the coaches created as much routine as they could, just listing the changes to the boys’ normal routine is exhausting; they were away from their own beds, their family and friends and immediately after a 15 hour longhaul flight they headed straight to an intensive training session. This was followed by a schedule of new hotels every few days, getting used to sharing three to a room, washing their own clothes, adapting to different daily training and playing times, eating different foods in the US fast food culture, the changing temperatures, different neighbourhoods, mini buses rides from city to city, constant banter and for some boys adapting to the personal challenge of homestay nights with local families.

I’m sure this tour has positively impacted and developed the boys in terms of their basketball skills but it has also increased their mental toughness within the 4C’s framework by:

“I can accept failure, everyone fails at something. But I can’t accept not trying”