SUPPORTING YOUNG OFFENDERS TO AVOID RE-OFFENDING AND TO DEVELOP CAREERS 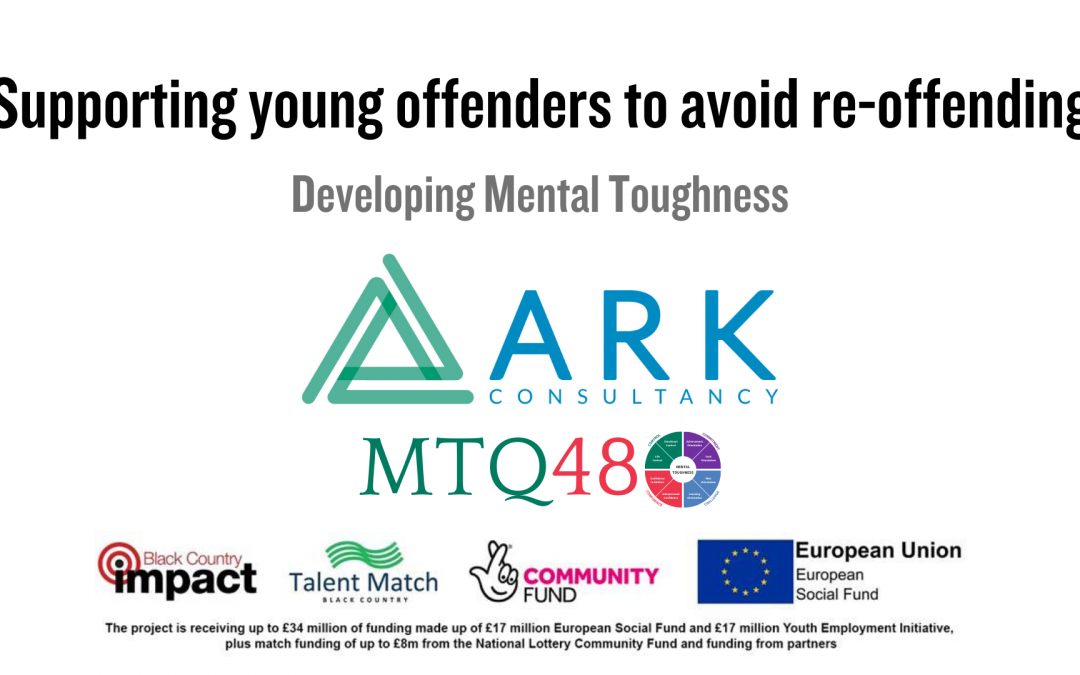 The role of the 4Cs Mental Toughness concept & the MTQ measure. Dec 2021

This article describes a major project initiated in 2019 and scheduled to run from April 2019 to March 2022. The programme has some important socio-economic goals.

A key component of the programme is the application of the mental toughness concept and the MTQ measure (the MTQ48). This provides:

About the project and its aims:

The Black Country is the name given to a region of Central England that was once known for its heavy industries. Post-industrial decline had led to a number of issues for the region which is now experiencing regeneration.  One of those challenges is youth offending.

Talent Match Black Country (BCTM) secured funding through the UK National Lottery Community Fund. From April 2019 to March 2022, its target was to work with at least 600 young adults aged 17 – 29 who:

The key aims of the project were to help young adults:

Enabling Young Adults furthest away from being work-ready to secure or take up enterprising and/or job opportunities, by improving confidence, optimism and offering intensive support through the provision of solution-focused Mentors.

The delivery partners wanted to demonstrate that applying the mental toughness concept and measure can contribute significantly to those goals.

As well as supporting young adults with an offending background, the project also targets and works with at least 397 young adults aged 17 – 29 who are unemployed and have multiple barriers to accessing the labour market. These include young adults who are or have a history of:

The project provides safe spaces where young adults can receive intensive mentoring support. They can access information, advice, guidance and a range of bespoke support packages, including access to training and counselling services.

“The project’s mission is to work alongside young adults who are experts through their own experience so that no one is left behind.” Talent Match Black Country

Mentors provide solution-focused support for a period of up to 12 months, helping mentees to identify and overcome barriers, cease their offending behaviour, and ultimately secure employment.

Talent Match mentors work to a far greater intensity than other similar projects providing support on a 12 to 1 (full-time equivalent) ‘rolling’ ratio.

There is a strong focus on the development of resilience and positivity, the core constructs embraced by the mental toughness concept. This provides the ability for young adults to adapt and bounce back when something difficult happens in their lives.

The metal toughness questionnaire, the MTQ48, which is a reliable psychometric instrument, enabled the assessment of the level of mental toughness of mentees to a significant level of detail (six factors). This is summarised below

The output and results of the measure help mentors to assess the support needs for each individual and enable them to provide targeted training and development interventions. Mentors are better able to understand how mentees respond to the changing environment and will adjust the appropriate levels of support

Mentees complete the assessment up to three times during their Talent Match development journey, enabling measurement of their progress alongside their behavioural, wellbeing and performance achievements.

This data provides a basis for evaluating the program as well as for improving and refining it.

Observations – What has been learnt

Social and economic deprivation, including childhood trauma, often provides an environment where wellbeing, aspirations and positive behaviour can be adversely affected. BCTM focused on developing the resilience and mental toughness of mentees.

Mental Toughness is a personality trait that strongly influences the ability to perform consistently under stress and pressure. It embraces qualities such as character, resilience, grit and perseverance.

BCTM sought to enable mentees to do more than survive adversity. Developing key life skills and coping mechanisms to adapt and bounce back when difficulties arise could enable many to thrive.

Between July 2019 and Dec 2021, 244 participants completed the MTQ assessment at least twice, making significant progress during the programme. As always there were some who did not complete the journey.

What did the data analysis and reflection indicate?

The norm for an adult is 5.50, Studies show that an average mental toughness score for late adolescence falls between 4.2 and 4.5. 17–19-year-olds, in general, will not yet have the maturity of an adult and that would be reflected in their level of mental toughness.

There is a significant difference between mentee scores and general scores indicating that most mentees who entered the Talent Match programme were significantly more mentally sensitive than most people and their peers.

More mentally sensitive individuals are less likely to feel in control of their circumstances and manage their emotions. They can lack direction and may often have a more pessimistic view about opportunities available to them. They are more easily influenced than most.

This is consistent with other studies and exercises which regularly show that young offenders are, in general, more mentally sensitive than either their peers or the general population.

What has been learnt from the data to date, is that BCTM has been particularly successful in supporting those who are furthest from the labour market.

People entering the BCTM programme with the most adverse backgrounds were significantly more vulnerable and mentally sensitive than others with less challenging backgrounds.

The data identified that the more mentally sensitive individuals were those who most improved their level of mental toughness and were those who continued to engage with their mentors, accessing one-to-one help, training and support during their journey.

Ultimately BCTM achieved the project’s mission, ensuring no one was left behind irrespective of personal barriers, also fulfilling the goals of the project – improving confidence, employability and reduction in re-offending.

This is an important project and, when completed later in 2022 will continue to be carefully evaluated. An important calculation will be the Social Return on Investment.

The project is continually monitored and, as of December 2021, it was possible to observe that the project had supported 54 people, who had completed a personal case study (a statement of outcomes) and completed, before and after, assessments of their mental toughness

Of these mentees, 30 had increased their overall level of mental toughness, 11 had remained at the same level, the balance had reduced. (See Note below).

The estimated collective SROI of the 54 mentee’s was an impressive £2,660,556.00. An average of £49, 270 SROI return for each person. Significantly in excess of the cost of the programme.

In addition, the project looks at impact at an individual level. For each participant, a “mini case” study is developed. An example is shown below:

Case study– male, aged 28, white British, referred by SUIT Wolverhampton Drug Service User Involvement Team. NEET for 78 months, he joined TM in July 2019. A disabled person who was engaged in substance misuse, with mental health conditions. He had not left his home in 6 years due to agoraphobia, he suffered with anxiety and depression. He was previously sectioned under the mental health act and attempted suicide. In receipt of ESA and PIP benefit payments.

Since joining TM, he has regularly attended voluntary groups, received one to one support, career IAG, advice on personal development and addressing practical barriers, support with travel and counselling.  His overall mood and confidence have improved, and anxiety decreased. He states that “TM has had a massive impact on my life and I’m hugely grateful of the support that has been provided, I would like to complete LGV training and secure employment in this area.”  SROI £45,867.

His overall MTQ score was 1 on entering the programme increasing to a 4 on the MTQ sten score increasing his mental toughness score by 3 points. Meaning this young person moved from the most sensitive range on the scale into the normal, giving him tools, techniques and learning to better deal with life’s ups and downs.

Note: The project coincided with the Covid 19 pandemic which had an adverse impact on some. There were mentees who lowered their levels of mental toughness scores during this period.

It is reasonable to suggest that Covid 19 has had a negative impact on some mentees, given their vulnerabilities. Nevertheless, BCTM will continue to support mentees throughout their journey.