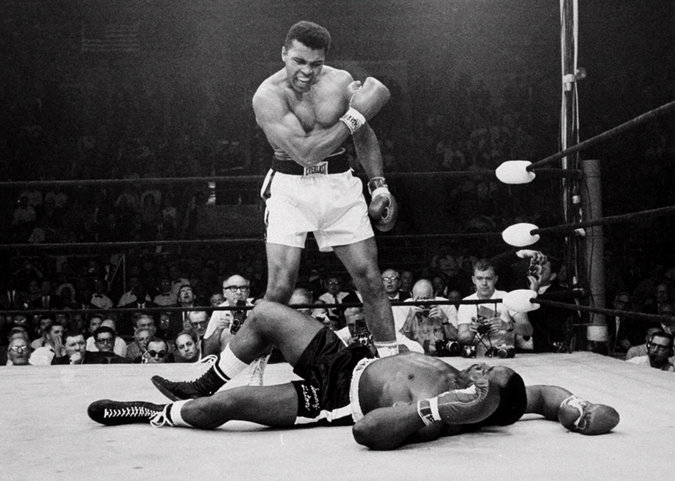 The third of our new series of mental toughness role models is in many ways is one of the easiest to offer as a role model.

Each post features an individual who has clearly and consistently demonstrated the elements of Mental Toughness that we call the 4Cs. Mental Toughness embraces what is commonly known as Resilience and adds the Optimism components of Challenge and Confidence to create a more complete model.

Born Cassius Clay on January 17 1942 in Louisville, USA Muhammad Ali achieved iconic status firstly as an superlative boxer winning an Olympic gold medal and the World Heavyweight Championship three times – sometimes against the odds at a time when his division featured a galaxy of boxers who would have been champions in their own right at any other time.

Voted the 20th Century’s outstanding athlete, he went on to make his mark in several other important areas – in championing the rights of black people, in religion and politics and in charitable work. And he did all of this on the world stage.

He could polarise opinion but whether you agreed with him or not, you couldn’t ignore him. No-one could – that included presidents and prime ministers.

Sadly, in later life he succumbed to Parkinson’s Disease but even so, this did not stop him being active and continuing to make a difference for the disadvantaged and the oppressed.

You could say that he demonstrated Mental Toughness throughout his life.

By his own admission, as a 15 year old he was close to being in trouble with the law in his home town but was encouraged to take up an opportunity to train as a boxer. He seized that opportunity. The lesson here is that we all have opportunities presented throughout our lives. Some have more opportunity than others. Some only get a few chances. An important feature of a Mental Toughness mindset is the ability to recognise opportunity when it presents itself and to have the courage and conviction to pick it up.

As a black person in a racially segregated country and from a deprived background, Ali would have few chances. But the rest is history. So how can we relate his life to the elements of Mental Toughness?

When we look at the Control element there is no doubt that he believed “he could do” when others didn’t believe the same. Whether it was his first world title fight with Sonny Liston or the legendary “Rumble in the Jungle” against George Foreman, no-one gave him a chance of winning. He did though.

And we see his sense of self-worth shine through when he surrendered his world title rather than be drafted into a war in which he didn’t believe. At the time many saw this as arrogance or even cowardice. Hindsight shows that he had a good point and would do whatever it took to make it.

This was also evident when he returned to reclaim his titles when most thought he was “past it”.

This of course is also an excellent example of Commitment, the second element of Mental Toughness. This embraces both goal orientation (and he showed this time and time again) and a determination to achieve his goals whether in the ring or in the wider social arena. He could hardly be said to pick easy goals or targets wherever he went or to choose the easy way.

His Emotional Control also became a defining feature. He could manage his own emotions, often to devastating effect in the ring and as he developed his career outside of the ring and became a television personality, his extraversion revealed a powerful ability not only to manage his own emotions but to impact on the emotions of all who met and saw him.

When we consider Challenge, Muhammad Ali never shirked from taking risk or stepping into the unknown or stretching himself. Like all risk-takers, many of things he attempted didn’t work out as he wished. True to a mentally tough mindset, he learned from each set back, had another go and just as often succeeded where he may have stumbled.

When he returned to the ring after a long lay off, he found that he lost his first fight. His response? – “I never thought of losing, but now that it’ s happened, the only thing is to do it right. That’s my obligation to all the people who believe in me. We all have to take defeats in life.”.

All of this was underpinned by his Confidence in his Abilities. Well evidenced in the boxing ring he would at times predict exactly when he would knock out an opponent – and that’s exactly what happened. The master of some unusual quotes, his confidence is summed up in one of his more offbeat sayings “I’m so fast that last night I turned off the light switch in my hotel room and was in bed before the room was dark”.

And of course his Interpersonal Confidence was also a major strength whether it was psyching out opponents in the ring or standing his ground against bigots and racists or presenting his ideas and views persuasively to the public. Never one to be monosyllabic, he would present a full case on any topic that interested him.

As in all the case studies, Muhammad Ali wasn’t perfect. His treatment of his wives could be controversial and he would espouse ideas which he would later regret. His fight with Ernie Terrell who refused to call him by his adopted name was perhaps shameful. He appeared to punish Terrell for calling him Cassius Clay.

On the whole though, he was an immense and often inspiring figure who championed the oppressed and contributed to some significant achievements around the world.

His mental toughness enabled him to achieve what others would have liked to achieve – and that includes politicians and leaders who strove to the same or similar goals.

Professor Peter Clough will often speak about mental toughness being a quality which enables us “to be the best that you can be”. We all have abilities; our challenge is to optimise them.

Mental Toughness describes the mind-set that every person adopts in everything they do. It is closely related to qualities such as character, resilience, grit, etc. Mental Toughness is defined as a personality trait which determines in large part how people deal with challenge, stressors and pressure …. irrespective of prevailing circumstances.

In my youth Ali was a towering figure and everyone I knew was fascinated by him. His sporting achievements were impressive and eye-catching but more impressive still is the example he gives of self-belief and self-worth. As Henry Ford once said “if you think you can, you can. If think you can’t, you’re probably right”. Ali obviously thought he could and it’s a lesson for all of us.

Finally apologies for producing a post that is longer than normal. It’s difficult to sum up a life like this in 300 words.