Why mental toughness influences your ability to innovate.

Creating a Culture of Innovation.

As we saw in the article on creativity, the terms “creativity” and “innovation” are often used interchangeably. However, they both express different, albeit connected, approaches to working with ideas. For this series of articles, we are careful to define them in a way that each can be considered carefully.

Today, in the age of engagement, organisations are very keen to harness the capability of the people in the organisations to come up with new ideas or products (in the widest sense of the word) that bring a measurable difference to the performance of the organisation.

It is this notion of measurability that distinguishes between creativity and innovation.

Creativity can be usefully described as “the capability or act of conceiving something original or unusual.” The outcome is an idea or a concept. It is not necessarily immediately practical nor is it likely to be tangible. It is the ability to develop that flash of insight that hasn’t previously existed.

We can usefully define Innovation as “the implementation or creation of something new that has realized value to others.” Creativity (and curiosity) is important in innovation.

Creativity is the ability to think (often called a higher-order thinking skill) that enables new ideas to emerge. Innovation is the process of taking ideas to the point where they are implemented and making an expected or desired difference. It is more than just thinking. Innovation can range from continuous improvement practice to generate highly original ideas.

Innovation is often an organisational issue. It relies on collaboration with others, support from others and may often require sources of funding. It can be iterative. Where a creative type can come up with a new idea it will remain an idea –barely tested. It often requires repeated trial, practice and modification to produce an outcome that works reliably. The culture of an organisation will either foster or stifle innovation.

So how does understanding mental toughness fit with this? Extremely well as it happens.

We’ve already seen how the mental toughness factors can relate to creativity. How some factors may contribute to the creative mindset.

Innovation requires the addition of elements to creativity – focus and a greater degree of working with others. Some of the mental toughness factors now have increasing importance and value. 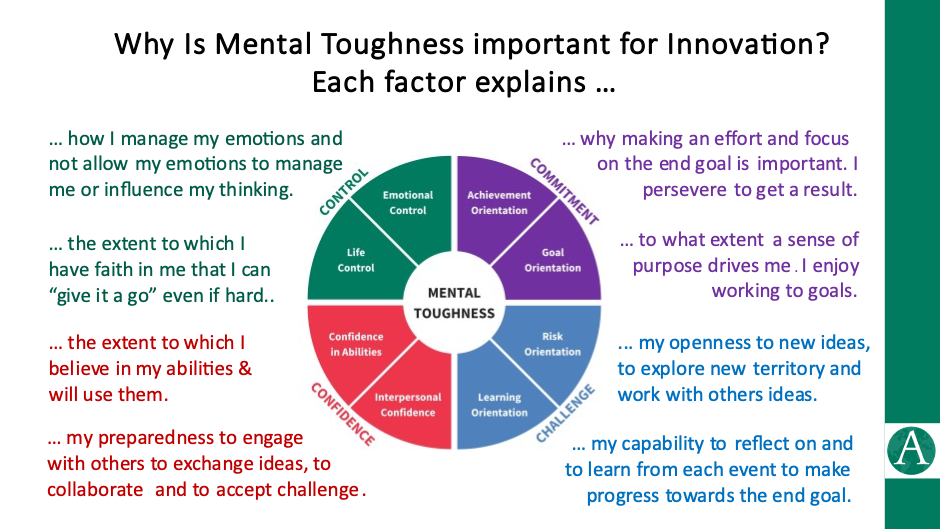 In the earlier article, we saw that Risk Orientation was significant for Creativity and Curiosity. These are important in Innovation and should also have significance here. The idea that the individual is open about looking beyond the known and considering many and any options to find a solution is a key enabler.

Innovation carries the risk of failure as well as the risk of finding the unknown unpleasant in some way. The leadership of the organisation will determine whether this is the way they want to playthings.

Innovation often embraces the process. That process can often be iterative, involving many trials and many experiments in order to find a solution that works and is reliable.

When James Dyson had that moment of creativity where he realised there could be another way for a vacuum cleaner to work, legend has it that he spent 15 years creating 5,126 versions that failed before he made one that worked. That is an innovation which produced a multibillion-dollar business.

This might then require the involvement of several more of the mental toughness factors.

Firstly, a strong learning orientation. 5,126 failures will for some, represent 5126 opportunities to improve their idea and make it work.  This is sometimes described as the “continuous improvement” ethos.

If one is not reflective, then they are more likely to accept “this hasn’t worked, let’s forget it and move on” simply because they are not thinking about what happened, why did happen and how can I do it better?”.

Next, both of the Commitment factors are relevant.

If Creativity differs from Innovation its principally because there is a purpose or goal with Innovation – to achieve a tangible useful outcome. So, a sense of goal orientation is likely to matter. The idea that an individual can visualise what needs to be achieved and through that develop a sense of purpose is a fundamental ingredient for innovation.

If it takes 5,126 attempts before success is achieved, it requires a degree of tenacity, of stick ability, to succeed. Many would give up long before that.

Achievement orientation represents the extent to which an individual is minded to do whatever it takes to achieve the goal. It can mean working hard, not giving up, even accepting discomfort in order to achieve that sense of satisfaction that goes with producing that outcome.

Particularly so in combination with learning orientation. It may be one thing to learn from each successive failure, which for many will feel like a setback.  It’s another thing to pick one’s self up, dust one’s self off and carry on.

Innovation, especially in an organisational context is rarely an individual effort. It might be led by an innovative and creative Individual but solutions are more often found in teams than in sole effort.

Confidence in one’s Abilities will be essential. Creativity requires ability and if despite having abilities galore, the individual is reticent about this, doubting themselves, they are unlikely to be able to manage with the demands of innovation.

That is especially so with Interpersonal Confidence. Almost every aspect of innovation requires some form of productive engagement with others. Whether this is to harness others’ ideas; to challenge their ideas; to enable them to challenge yours; to ask the “stupid” questions which are rarely stupid or to engage in constructive discussion and dialogue and so on, a reasonable level of interpersonal confidence will be a significant advantage here.

And finally, to Control. The sense that that individual believes they have sufficient control over their circumstances, themselves – particularly their emotions – to have either the sense of worth to know they have it within themselves to try. The essence of the “can-do spirit”.

Given that innovation is challenging and often features setbacks and less than encouraging comments and feedback from colleagues and managers, the capacity to manage one’s emotional response can be valuable and even essential.

For most of my career, before I established AQR International, I was employed as a problem solver or as it is often known a “trouble shooter”. The brief was commonly to find a new way to operate either because events were overtaking the current method of operation or there was a desire to capture some advantage over the completion. You could say I was innovating.

Many times, the change was to bring an idea to fruition but to deal with the petty politics and petty jealousies that abound. Maintaining poise and managing what I truly felt was frequently tested.

This illustrates too, the importance of innovation as a cultural feature. Culture can enable or can hinder innovation.

Assessing mental toughness within an organisation can be extremely valuable here. After all, mental toughness combines two important ideas – resilience and positivity. One without the other will rarely deliver.

Once again, it is easy for me to leave the impression that innovation is only for the mentally tough. Not so.

The purpose here is to show that aspects of mental toughness bring a distinct advantage to innovation.

The key, as ever, is self-awareness. It is possible when lacking self-awareness for the more mentally tough to struggle and to fail. It is equally possible to those who have elements of mental sensitivity in their profiles to be successful with innovation. Again, it is all about self-awareness.

The reality is that almost everyone has degrees of mental toughness and mental sensitivity in their make-up. Depending on circumstances, the situation and on the level of self-awareness, individuals can either thrive or find there is something within them that hinders their ability to deliver.

If innovation is important, and it is, then understanding how we can optimise innovation, either as individuals or leaders of an organisation, is also important.