This article is an insightful illustration of an individual who has clearly and consistently demonstrated the elements of Mental Toughness defined as the 4Cs: Control, Challenge, Commitment & Confidence. Mental Toughness embraces what is commonly known as Resilience and adds the Optimism components of Challenge and Confidence to create a more complete model.

Born Maria Sklodowska, more than 150 years ago, on 7 November 1867 in Warsaw, Poland, Marie Curie achieved iconic status as a remarkable scientist who developed what we now understand as “radioactivity”. She became the first person to achieve a Nobel Prize in two different disciplines for work that has transformed everyone’s lives forevermore. From very humble origins with little financial support and resources, Marie, and her husband Pierre, isolated and identified Polonium and Radium when most of the scientific community didn’t believe in their existence.

Her deep sense of purpose and value that drove her work ethic was working for the common good. For instance, Marie developed the first ambulances with x-ray capability in WW1.

Whilst today Marie Curie is celebrated as one of the world’s highest achievers in Science, it is even more significant in light of the systemic norms of the day where not only were women not expected to work as scientists and raise a family, but would commonly be held back from doing so.

When invited to speak on their work at the Royal Institution in London, only Pierre was allowed to speak. When the Nobel Prize committee awarded the first Nobel Prize in 1903, they initially awarded it only to her husband. The Committee eventually relented and Marie became the first woman to receive a Nobel prize. Quite rightly Marie Curie was role-modelling what would become feminist ideals and she was changing the world through her beliefs and actions.

When we look at the Control elements of Mental Toughness, Marie demonstrated the sense of “can do” belief in self and her ideas despite widespread opposition in the scientific community. Renowned for her Emotional Control, Einstein remarked that she was probably the only person who could not be corrupted by fame.

Curie herself said “Life is not easy for any of us. But what of that? We must have perseverance.”

When we consider Commitment, this is where Curie excelled. Her attitude is succinctly embodied in another of her quotes “I never see what has been done; I only see what remains to be done.”

She clearly had a goal and a belief in her ability to achieve it. Importantly, she did whatever necessary to achieve that goal. The work was heavy and physically demanding – and involved danger. Pierre and Marie Curie carried out all of the work themselves processing tons of raw pitchblende – a highly radioactive material. Working very long hours, they didn’t have a laboratory assistant until 3 years after winning the first Nobel Prize! 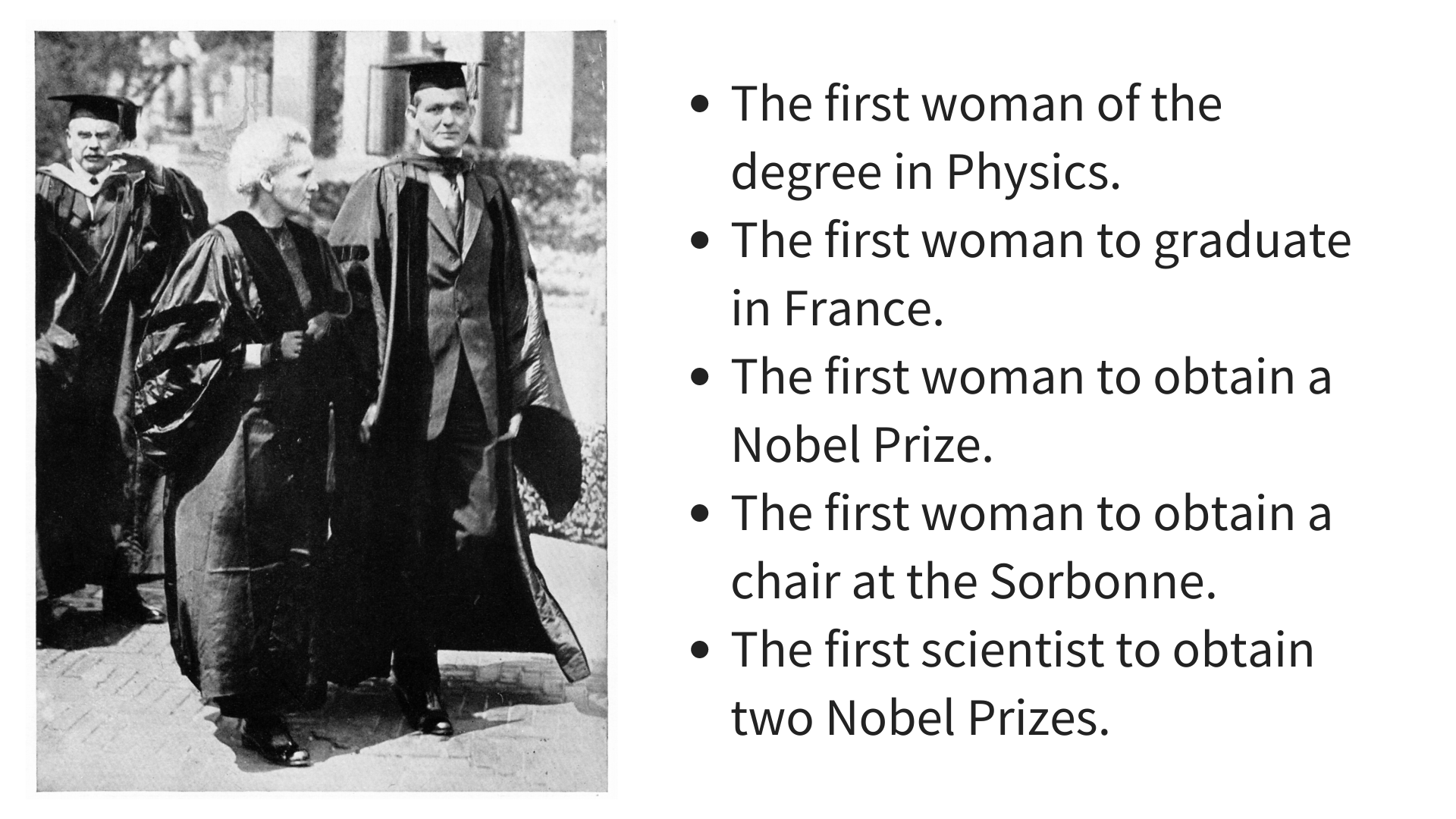 Of course, when we consider Challenge, as a genuine pioneer in her field, facing significant opposition on numerous fronts, she was clearly open to new ideas and to taking risks – and learning from their consequences, good or bad. Marie Curie is famously quoted as saying “First principle: never to let one’s self be beaten down by persons or by events” and “Nothing in this world is to be feared… only understood. Now is the time to understand more, so that we may fear less”. This attitude is a wonderful clear expression of the importance of being open to learning.

Curie’s work ethic, mindset and choices were underpinned by her Confidence in her own Abilities. She was a competent and talented scholar as evidenced by achieving the highest grades at school before entering University in Paris at 15 years of age. Being determined not to fall into teaching or becoming a governess as the only occupations available for professional women at that time, Curie pursued Physics and Mathematical Sciences. She clearly valued challenging the status quo and committing her personal efforts to find solutions when she stated “Life is not easy for any of us. We must have perseverance and above all confidence in ourselves. We must believe that we are gifted for something and that this thing must be attained”.

Her Interpersonal Confidence was also a clear strength. She mixed freely with her contemporaries and earned their respect – again when it was unknown for women to offer and express ideas that challenged the beliefs and norms of the day. She was also a prolific writer.
As in all case studies, Marie Curie wasn’t perfect and just like any other human being she had her faults. Her single-mindedness led her to take risks. She eventually died from exposure to radiation. To this day her books and notes are locked in a lead case – being highly radioactive.

She seemed to be incredibly self-aware and very reflective. These traits enabled her to develop a reputation for honesty and generosity. She gave away most of the money she received from the Nobel Prizes and insisted that any prizes be given to good causes.
Nevertheless, her Mental Toughness enabled her to achieve more significant outcomes during her research career than any of her peers. If Marie Curie was a man, these achievements would still be remarkable because the world of science and innovation was and still is very much a man’s world. As a woman, Curie had a harder path to tread but dealt with all of the biases, barriers and injustices with remarkable poise.

She was not averse to making impactful political gestures either. In her time Poland didn’t exist, being part of three Empires. She named her first discovery Polonium in support of her dream of a free Polish state.
Our colleague Prof Peter Clough often uses a phrase to describe what Mental Toughness brings to an individual. He describes it as “being comfortable in your own skin and dealing with what life throws at you and the opportunities that arise”. There may be no better example of this than Marie Curie.

Mental Toughness describes the mindset that every person adopts in everything they do. It is closely related to qualities such as character, resilience, grit, etc. Mental Toughness is defined as a personality trait which determines in large part how people deal with challenge, stressors and pressure …. irrespective of prevailing circumstances.

Finally, again I need to own up. My mother, a Pole, perhaps for reasons now very obvious, idolised Marie Curie. I paid little attention to that until recently. Belatedly, researching this article became a pleasure and I found it more than a little inspirational.
During the course of that research, I came across another fascinating quote “The older one gets, the more one feels that the present must be enjoyed; it is a precious gift, comparable to a state of grace”. It seems that Marie Curie was paving the way for what we now refer to as Mindfulness too.

If your interest is piqued to learn more about your own Mental Toughness profile an how to assess and develop Mental Toughness, please visit www.aqrinternational.co.uk. and if interested in being a licensed user, contact us through the site.
Feel free to connect with me too on LinkedIn or via doug@aqr.co.uk

Special thanks are due to Lia Zalums who helped me to put this post together. Lia is a remarkable champion for women in STEMM careers. Based in Australia, she can be contacted at lia@liazalums.com