Mental Toughness and the Sexes

A focus on women’s development

Mental Toughness is a personality trait that describes how individuals respond mentally to stressors, pressures, opportunity and challenge, irrespective of circumstances.
It is a spectrum with mental toughness at one end and mental sensitivity at the other.
It is extremely well evidenced with over 200 peer-reviewed academic papers supporting the concept, the associated psychometric measure – the MTQPlus, MTQ48 and MTQlite and the applications of the concept in a number of areas important in individual and organisational development.
The psychometric measures achieve high levels of reliability and validity.
The Mental Toughness concept consists of 4 constructs – Control, Commitment, Challenge and Confidence. These, in turn, are explained in terms of 8 factors. These are summarised below: 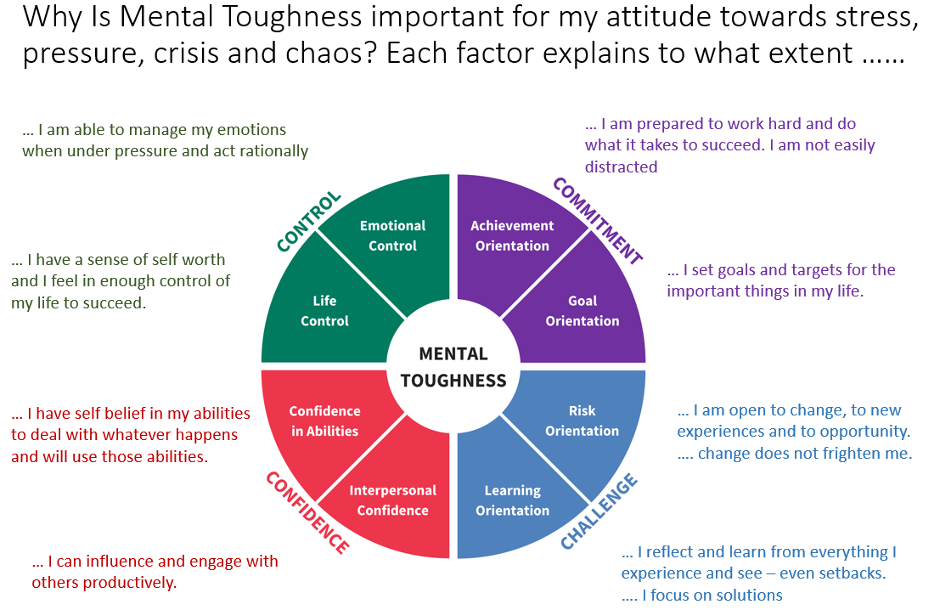 From the outset, large scale studies examining overall mental toughness have generally shown that the patterns of scores for adult males and females have been very similar. Statistically, the difference is negligible. This indicates that there is little evidence to suggest that males or females are not more or less mentally tough than the other.
This is an important observation. The studies suggest that there is no reason, in terms of and individual’s mental approach to life and its challenges, why males or females cannot deal with pressure and challenge equally well.
The same observation can be made about patterns of scores on the Constructs – Control, Commitment, Challenge and Confidence. Similarly, about the patterns of scores on 6 of the 8 factors (those contributing to Control, Commitment and Challenge).
When Interpersonal Confidence and Confidence in Abilities is examined, large scale studies have shown that, in general, males score very slightly higher on average on Confidence in Abilities than do females and that, in general, females score very slightly higher than males on Interpersonal Confidence. Although detectable neither difference is statistically significant.
When we look at Mental Toughness patterns in adolescents (ages 11 – 18) there may be a discernible difference. Some studies do show that males tend to have a statistically significantly higher level of mental toughness than females of the same age.
A number of potential explanations have been offered for this difference including hormonal changes, bias in teaching staff, whether the school is a single-sex or mixed-sex school and the culture of the school.
A major study in the UK for the Independent Schools Council involved around 10,000 student form 58 schools indicated these differences. However, detailed examination for each school found that in a significant number of these schools (around 10) the differences between males and females were negligible and in single-sex schools, females generally developed their mental toughness as quickly as did males in other schools.
This indicates what is sometimes described as a sex bias is much more a cultural issue than an inherent issue.

At the individual and small scale level – what might be the issue?

When small scale studies are carried out which focus on a particular organisation, sector or occupation, it is possible to see differences in reported mental toughness/sensitivity between males and females doing the same or similar things.
In most cases, the most likely explanation offered is one of cultural bias – very often in favour of males.
The two studies following illustrate some of the complexity in dealing with discrimination and bias.
A study c 2007 looked at males and females who had achieved significant leadership positions in organisations in the Polish Financial Services Sector (mostly insurance companies). The study was published in the Harvard Business Review (Polish edition).
The study found that mental toughness scores for females entering those organisations were generally slightly higher than those for males. Indicating that females may be set a higher bar for entry than was the case for females. More significantly it found that mental toughness scores for females in senior and middle leadership roles were significantly higher than those for males at the same levels.
The report observed that this was the consequence of bias in a previously male-dominated industry.
To make the same degree of progress, it appeared that females had to show a greater level of mental toughness to achieve the same levels in the organisation than did equivalent males.
The study didn’t look at solutions or interventions.
In 2017/18 AQR International carried out a piece of work with a school in the UK. Previously a predominantly boys school, this was now a mixed-gender school. 60% of staff were now female where previously they accounted for a very small proportion (less than 10%). All staff were also assessed using the MTQPlus which confirmed that, on average, mental toughness scores for males were significantly higher than those for females.
Consulting with all parties also revealed that female members of staff reported many examples of what they perceived to be discrimination against them. Male staff appeared to be largely unaware of this.
A two-pronged approach was adopted – to develop the mindset of female staff and work on the self-awareness of male staff and the impact of their attitudes and behaviour on female colleagues. Within 12 months, there was general agreement that significant progress was being made to eliminate or reduce most of the instances of apparent sex bias.
These case studies and others illustrate the complexity of dealing with sex/gender bias and of the value of using the Mental Toughness concept and measure to create essential self-awareness and awareness of consequential attitude and behaviour on others. Indeed, it seems there is a significant impact in behaviour change through awareness itself as a function of the Mental Toughness assessment as the catalyst for both men and women.
These case studies indicate the practical and cultural impact that can occur when teams and organisations adopt the Mental Toughness framework and assessment to facilitate positive change in complex male-dominated organisations.

If your interest is piqued to learn more about your own Mental Toughness profile and how to assess and develop Mental Toughness, please visit www.aqrinternational.co.uk. and if interested in being a licensed user, contact us through the site. Please feel free to connect with me too on LinkedIn or via doug@aqr.co.uk

Special thanks are due to Lia Zalums who helped me to put this post together. Lia is a remarkable champion for women in STEMM careers. Based in Australia, she can be contacted at lia@liazalums.com.